With the dream of catching a Yellowfin Tuna and opportunities in Australia fading away more and more since i started chasing this fish in 2008, i was keen to travel to Niue Island in the South Pacific, where these fish still get caught close to shore, along with Wahoo and other species that appeal.
I had 3 weeks annual holidays over Christmas and as it's cyclone season it was far from an ideal time to go but i booked the trip about 6 months in advance and started prepping. Both logistically and physically it was a challenge but i managed to freight a few helium bottles over as my main focus was on gas ballooning dead baits over the reef. I also started training as i assumed the humidity and terrain would be challenging. 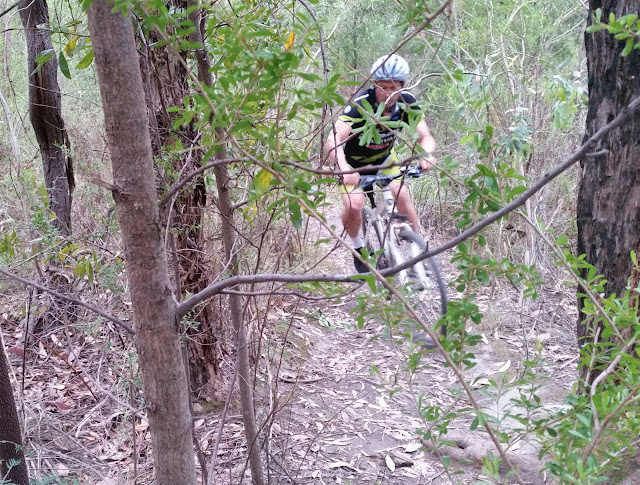 Everything was packed weeks before and i was itching to go 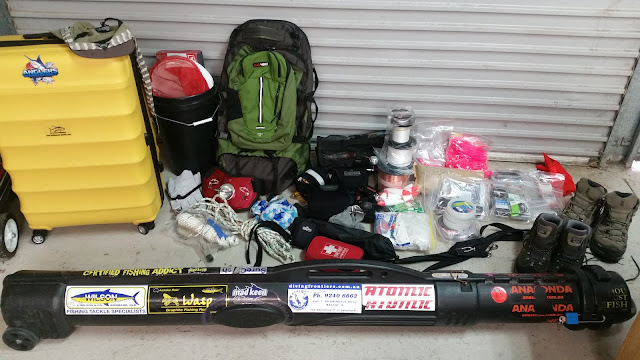 Once i arrived, the trip didn't start well as i lost my camera on day one somehow and all pics were taken with my phone and some with the 10 second delay which was difficult at times, especially in the rain which there was plenty. So i don't have any pics from the charter i arranged with Ian from Seaturtle Charters. Ian took me around the island looking for rock ledges i could fish and possibly have access. Ian is a full time fisherman on Niue and knows the best areas to get strikes so his info proved very valuable. The boats are launched off the Niue Wharf with a crane. 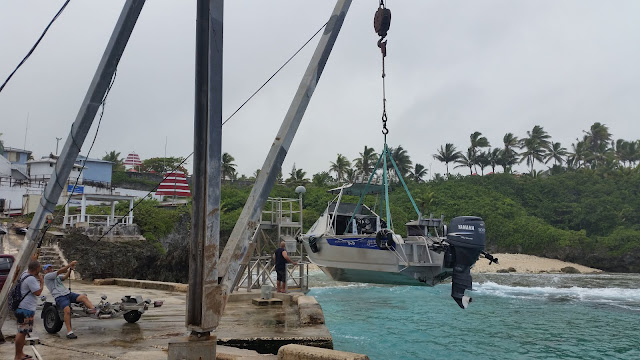 The next couple of days i spent trying to access the spots i saw from the boat and some of these proved rather challenging but armed with a machete i managed to find them all. The terrain in places is brutal with razor sharp coral pinnacles. 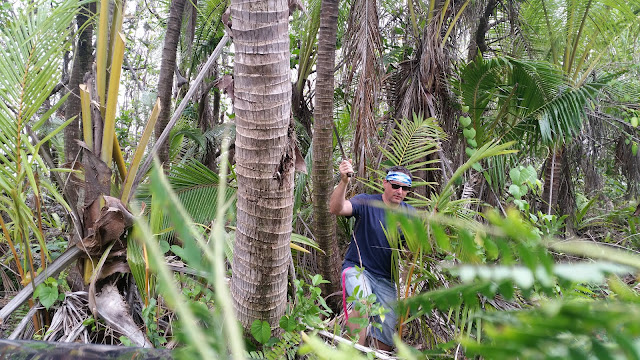 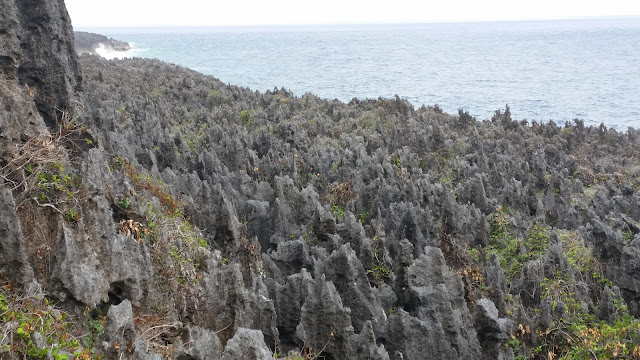 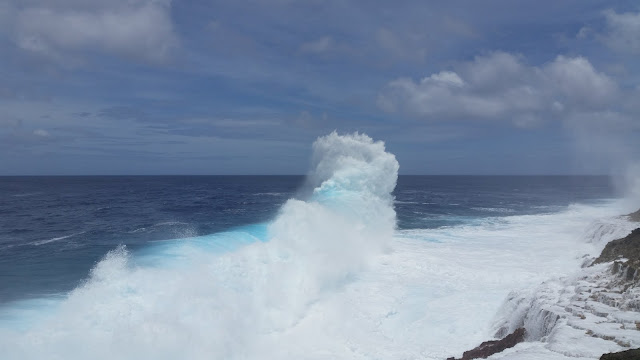 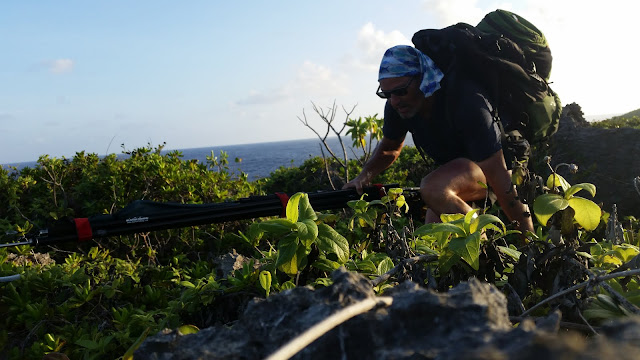 The first couple of days didn't go well as the wind wasn't the best for ballooning and i snagged some baits and lost some valuable gas balloons. At the end of day 2 i already looked like a cooked Coconut Crab, of which there were plenty on the island called Unga. 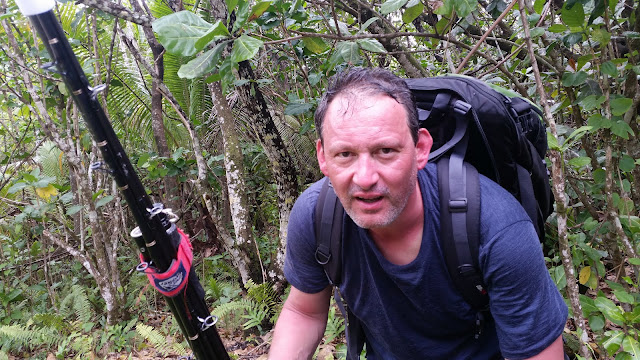 Then things changed with the arrival of a category 2 cyclone and while everyone was busy to batten down the hatches i was excited as i was getting great drifts. The spot i had been fishing was getting too rough and i moved to the calmer side with the wind behind me. 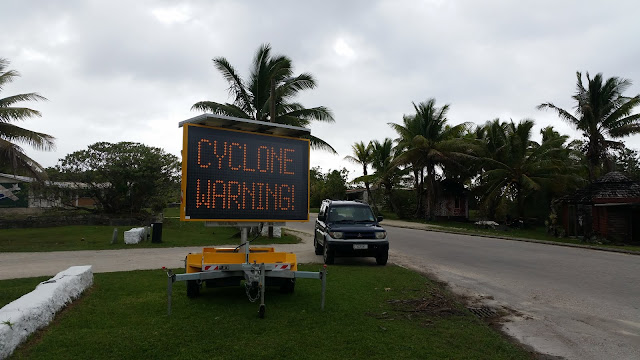 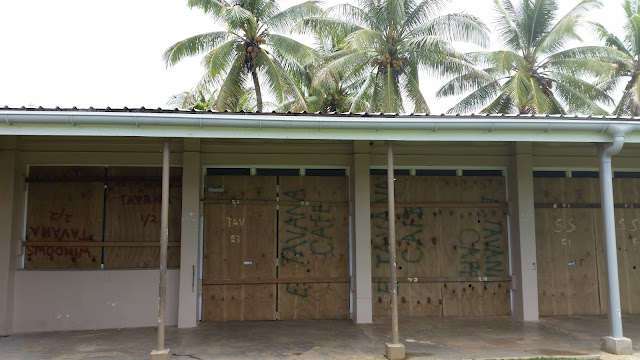 I was getting my first hookups but the first 3 fish ran deep and shredded my line on the reef. The fourth fish stayed higher and i managed to get him into a crack in the reef and just as a Yellowfin Tuna popped up and over with a wave, my line got caught on the reef. The Tuna was on the reef and there was nothing i could do about it. The next wave swept him back out and it was all over. Devastated but excited i fished hard but there were no runs for the next 3 days.
Sunday is a day of rest on Niue with no fishing allowed and a great day for sight seeing, snorkeling and recharging the batteries. 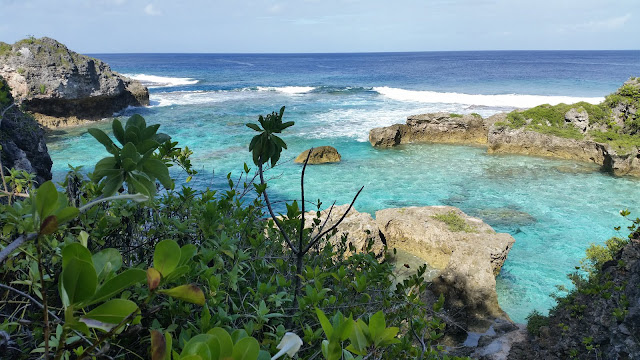 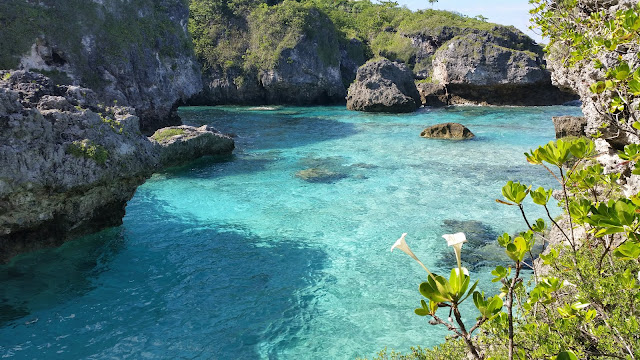 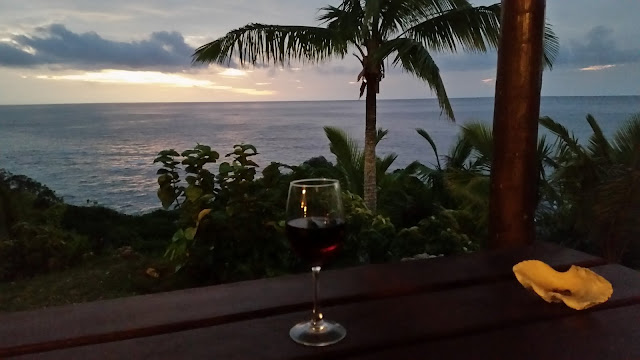 While i was running low on helium i wanted to save it for the windier days and went down the wharf to fish with lures and live baits. Although i had no runs on the wide drifts off the wharf, i managed to catch and release a few fish in close. A Bluefin Trevally and Red Bass took a live bait while a Bigeye Trevally took a lure. I also caught a few reef fish on bait but mostly pesky Triggerfish. 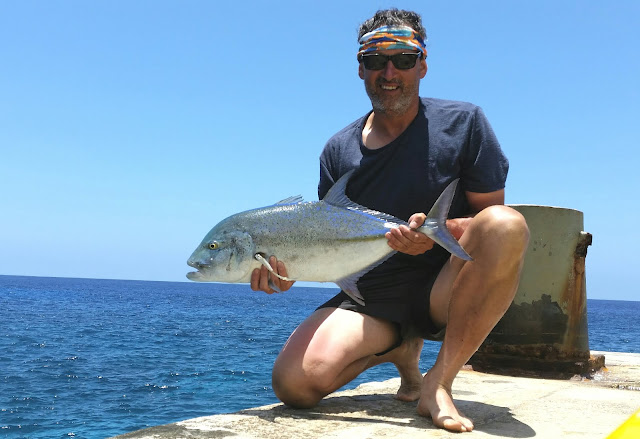 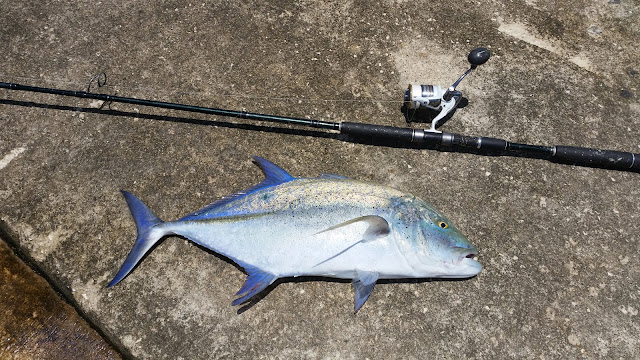 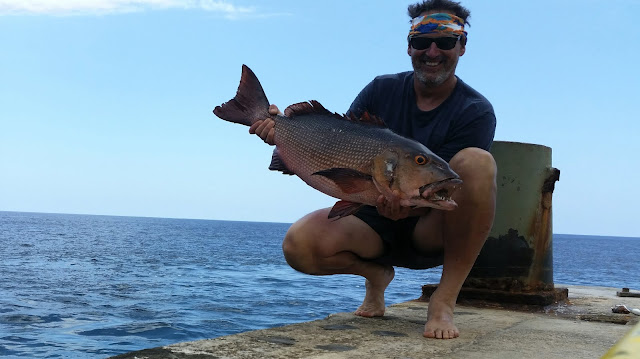 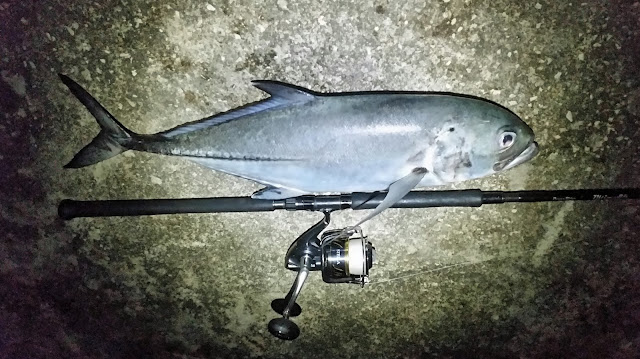 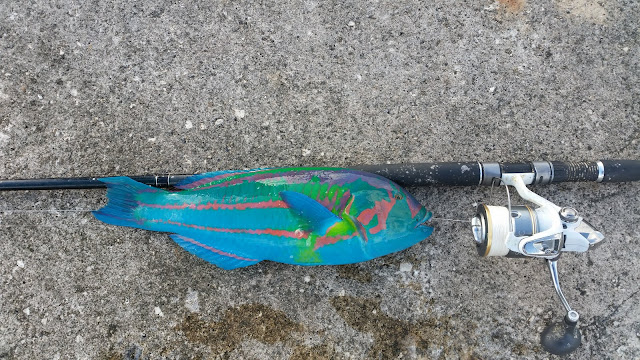 This was my second last balloon and i was out of gas. The fishing was a bit slow and the boats were only getting the occasional fish but i heard a local canoe fisherman caught 2 Yellowfin Tuna the day before so i was keen to get a bait out there. 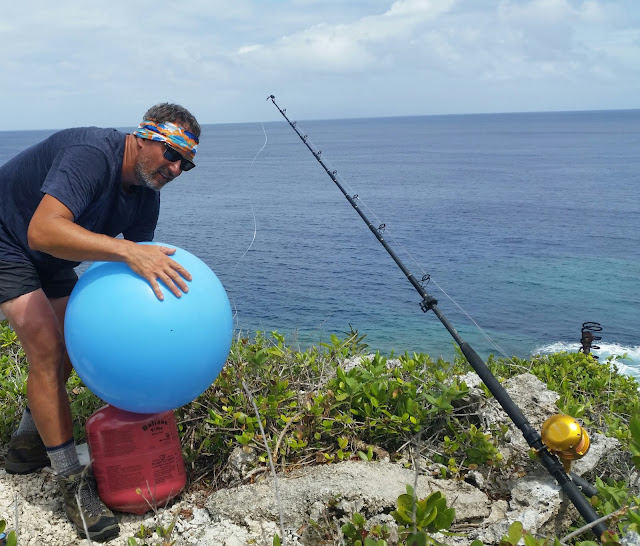 Around lunchtime i saw a splash and the reel screamed instantly. I got a solid hookup and went hard on the fish, hoping he would stay high which he did. As i watched the line come closer to the reef i was nervously trying to guide the fish into a crack and suddenly i realized the fish was already in there and i went hard to get him up on the reef. To my relief he popped up and over and now swam on the reef in full view and it was indeed a Tuna. Changing direction once more on the reef he came close to the edge and as i was fishing from up high i kept the pressure on right up until he popped over the last step on the reef but i couldn't get his head over as one of the hooks was stuck on the coral. I jammed the rod in a crack and kept the pressure on and raced down where i had my gaff set up ready and once the gaff was in i think half the village heard me shout. This was a dream come true and the fish i was hoping to catch. 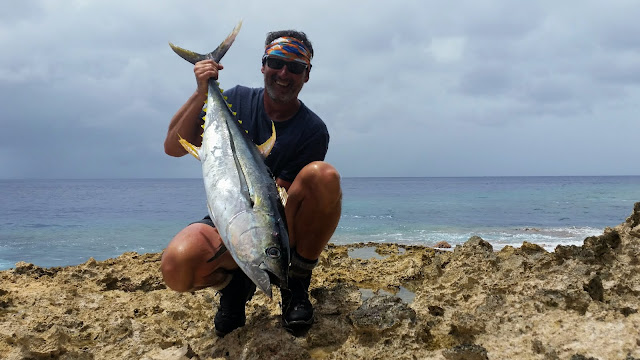 I was keen to get the Tuna back to Ian's pace and when he saw it he was stoked for me and chilled it overnight to firm up the flesh and as he was working as a head chef in the past he certainly knew how to prepare a great sashimi, which we had for the next 2 nights. I also gave some to a couple of people who helped me along the way. 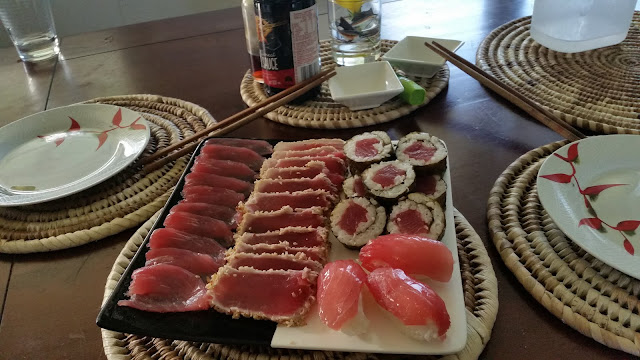 All up Niue Island is a great place. Rather than full of 5 star resorts it's full of great people and i hope i can return sometime for a crack at the Wahoo.

A special thanks to Ian Richardson from www.seaturtlecharters.co.nz who went above and beyond in helping me get what i needed while on the island. Also a big thanks to Stafford for his access and hospitality at the Sails Bar. And a big thanks to Niue Tourism and all the people of Niue


If you liked this landbased fishing blog, please check out plenty more on my Busted Fishing website www.bustedfishing.com