Prior to leaving on our trip around Australia, a road trip with 2 mates was organized.
After some time of planning and weeks of squidding for bait it was time to hit the road for Yalata on the edge of the Nullarbor plain, in the hope of catching a big Mulloway. The start of the trip was an indication of things to come when we drove off with the power cord still attached to the freezers, which were loaded on the trailer. Somewhere near Mildura we noticed we were lost when the road stopped and a barge had to be taken across the Murray river. Next the airconditioner played up and the window got stuck to top it off. Finally we reached Port Augusta, just in time before the gate got locked at the Caravan Park we booked for the night. It was 42 degrees and changing the bait and food freezers from the generator which we ran while driving, to 240V was a priority. We soon discovered that to be a challenge without the power lead which was still attached at my house in Melbourne. So we sacrificed the airconditioner and ran the lead to the trailer. After a hot night the next day started with a wrong turn and we ended up in Whyalla. Oh well, always wondered what the place looked like.
The road signs in South Australia kept us amused along the way and we finally made it to the turn off to the Aboriginal land at Yalata. 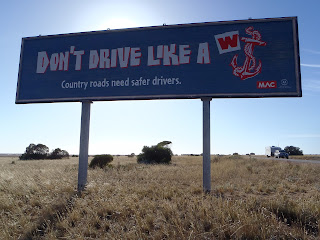 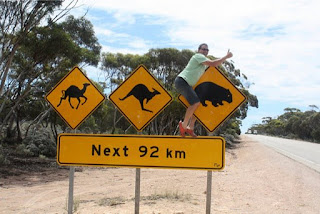 We collected some fire wood and then the landscape soon changed from arrid bush to sand dunes and it wasen't long before our first bog. 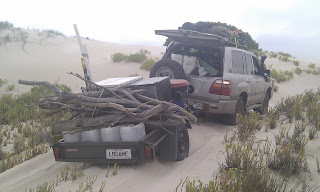 Eventually the camp was set up at "The Hilton" and we admired the first sunset in this great country. 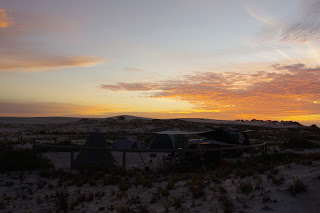 The first day was calm, hot weather and we managed a couple of small school Mulloway and a nice Gummy. Our hopes were high but stormy weather soon rolled in. 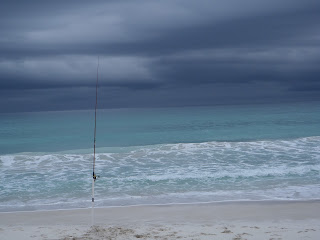 The following night provided a spectacular lightening show and furious winds which had us worried about our camp blowing away. The dome tents were at a 45 degree angle slapping in the wind but held together through the night. Still windy in the morning saw the surf whipped up and we decided to fish a different spot with limited sucess.
Over the next few days the wind persisted and temperatures were at an unusual 23 degrees instead of the expected 40's. Also seaweed became an issue and we tried different spots driving over the dunes and along the beach at times with more bogs. 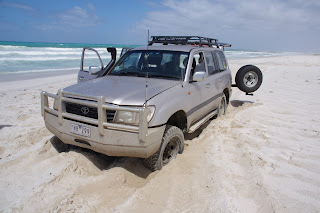 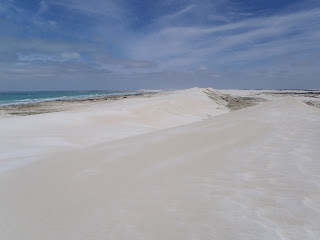 The fishing for the big Mulloway we hoped for continued to prove difficult with high winds and weed and we only managed small ones from 20cm to 60cm. All up between the 3 of us we caught 21 soapies and 11 gummies with only 1 shark bite off which we expected a few of. Eagle ray's also made an appearance regularly. 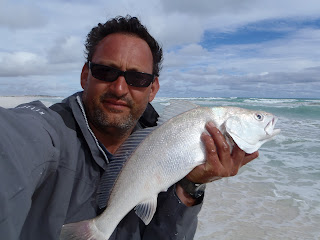 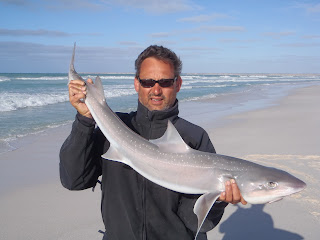 On our way home of course we had a car break-down and had to be towed to Ceduna to be fixed, which rounded our trip off nicely. All in all very dissapointing about the size of the Mulloway we caught but Yalata is a great adventure I highly recommend any keen fisherman to put on the bucket list. 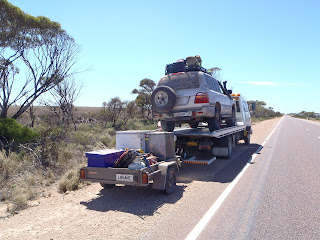